This post is going to go into more detail about the different changes that had to be made to the body and how we made these changes and overcame the difficulties around them. I will be going through each iteration of the robot from the very first one we made since taking over the last S.A.R.T team.

The very first modification we made to the robot was reverting the robot back to its original servo design where it had specific holes for each part of the servo to fit into to stop the problem the team had at the competition where the single cut out square for the servo broke.

Once the servo holes had been reverted, we decided to slim down the case to match what out new camera dimensions were. This slimmed down our robot quite considerably making the limiting factor of how slim we could go the servos. 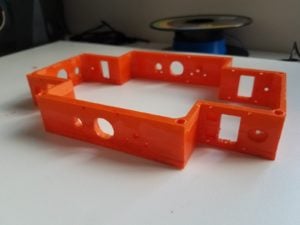 Iteration 3 (The camera and sensor era)

This iteration of the robot we incorporated the new sensors that we had acquired such as the temperature and IR and cameras on to each side of the robot. We first had troubles fitting all the sensors in as the camera had to be at the very centre to avoid confusion. we managed to fit all the sensors by overlapping everything

Up until this iteration, it was taking quite a while to get each 3d model of the body done so we got a little help from another person in our group to help us progress. This iteration we elongated the robot and added the screw holes to compensate for the new UDOO x86 Ultra.

In this iteration of the robot, we incorporated even more sensors that would help the autonomous properties of it. These changes came with even more issues as it was becoming ever increasingly difficult to fit all the sensors within the confines of the chassis. We also added an ethernet port on the back of our robot so that if we need to test our robot or worse comes to worse we can control out robot tethered with a long ethernet cable. 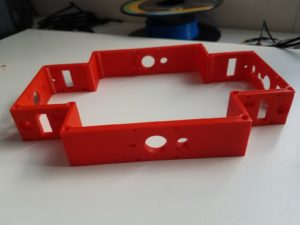 Iteration 6 and 7 (The sensor hole era)

These few iterations we used mainly to move sensor holes around and add standoffs to where we were screwing the sensors onto the sides and fixing minor issues that came along with moving certain parts around.

The current iteration of the robot has all the sensors, servos and cameras in the right places and is on the verge of full functionality. Any further modifications to the current chassis will be shown in future blog posts.

Currently, our chassis is comprised of three parts, the lid, the base and the middle “chassis” itself. The bottom part is currently finalized as it just has the UDOO holes in it but the top part we are still having trouble with. We are still finalizing where the Speaker, Mic and other sensors will go on the lid in relation to the other components.