Last year the old team’s chassis had a square hole instead of servo mounts as well as screws which meant that the wheels could be flipped but it also meant that the chassis was a lot less strong and stable, which led to the necessary gluing of the servos to the chassis. Based on their experiences last year at RoboCup they only ever used the servos facing outwards, meaning a larger wheelbase. We went back to a previous design where there were divots for the servo’s knobby bits and modified it slightly. We have printed a draft copy as a test so that we can put the servos on it and test it with the UDOO x86 Ultra. 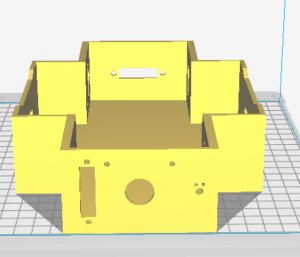 Once we test the webcams with the UDOO x86 Ultra we then can buy the good cameras than from that we can design the final chassis that will have all of the proper modifications.

For the next print, we will revise the servo mounts to make them easier to remove and replace servos, add the four new camera mounts, and slim the chassis down a bit. Other than that, the chassis is not too far off from what we want it to be. 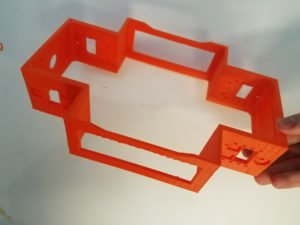 Also, I was trying to think of a better title for this post than “Chassis”, so I looked up what chassis is in French and it turns out chassis is French for “frame”.