At the end of 2018 we were gifted a TurtleBot3 Burger by our new sponsor, Tribotix. 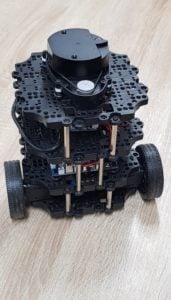 A TurtleBot is a low cost robot that we built over a day during the holiday workshop. The TurtleBot has a Raspberry Pi 3 (Model B) and a 360° LiDAR, 3-Axis gyroscope, 3-Axis accelerometer and 3-Axis magnetometer sensors, OpenCR and two Dynamixel actuators. The TurtleBot has Robot Operating System (ROS) installed on it. ROS is a robotics middleware which is used to help run simple commands such as hardware abstraction and low-level device control.

The TurtleBot can be controlled directly by a remote pc or with a remote control (e.g. ps3, Xbox, Wii, android device). It uses simultaneous localisation and mapping (SLAM). Using the LIDAR the TurtleBot builds a 3D map of its surroundings and places itself on the map. The TurtleBot can then autonomously plot a path for itself.

We are looking at the code of the TurtleBot as we are hoping to bring this concept into our robot. However, due to the limitations of our sensors, our code will be highly modified and simplistic. We are going to have the robot make a 2D map using matplotlib and numpy and have the robot plot its way through the maze autonomously.