We rose at 7 AM for breakfast on the final day, after only 4 hours of sleep. Over cups of tea and coffee, we glared at Aaron and Riley, who seemed loud and cheerful as usual thanks to their slightly earlier night (and who still managed to get down to breakfast after the rest of us!).

The time came to put our newly repaired robot to the test. Fortunately, the rubber epoxy held out! For anyone who’s interested, yes, the robot is still functional and still held together with the epoxy.

Our final runs drew a large crowd. There was much applause when the robot did a particularly challenging task, such as scaling the double hurdles. We were due to run our sensor tests to get our sensor multiplier score directly after our second final run. We scored full points from our camera stream and QR code reading, however, the hit-or-miss nature of our hazmat detector didn’t quite cut the mustard. After some discussion, our motion detection was accepted. The big problem was with our two-way audio, which was way too quiet due to the cheap earphones. We were adamant that everything had worked the night before (assuming we weren’t just all delirious from lack of sleep), so Raymond was gracious enough to let us test the systems again later.

No sooner than we had turned our backs on the sensor testing station did we hear a series of explosions from the Major section. Apparently, the LiPo batteries powering their robot exploded one by one as the extra load from the failed packs and the heat from the explosions wore them down.

We watched the unlucky team on the projector while they fanned their robot rather than use the fire extinguisher in an attempt to save the hardware from the foam, but it was a futile attempt that only fueled the blaze. At that point, we were all forced outside due to the smoke and fire danger.

While waiting for the smoke to be extracted, we held a team leader meeting outside. Unfortunately, due to the wasted time, we would only get one more final run.

After that excitement (and feeling considerably more awake), we demonstrated our audio sensor functions once again. The output was louder and the input translation was more accurate than our previous test. While it may not be the best system possible on account of the speakers and microphone we were using, we proved that the functionality existed to communicate both ways between a victim and the controller.

With the runs complete and the scores multiplied, we were called together for a final team meeting. We were proud to come in first place, and pleasantly surprised to win the Open Source Award as well, on account of all the time we spent on our blog and providing current code on GitHub and 3D models on Thingiverse. 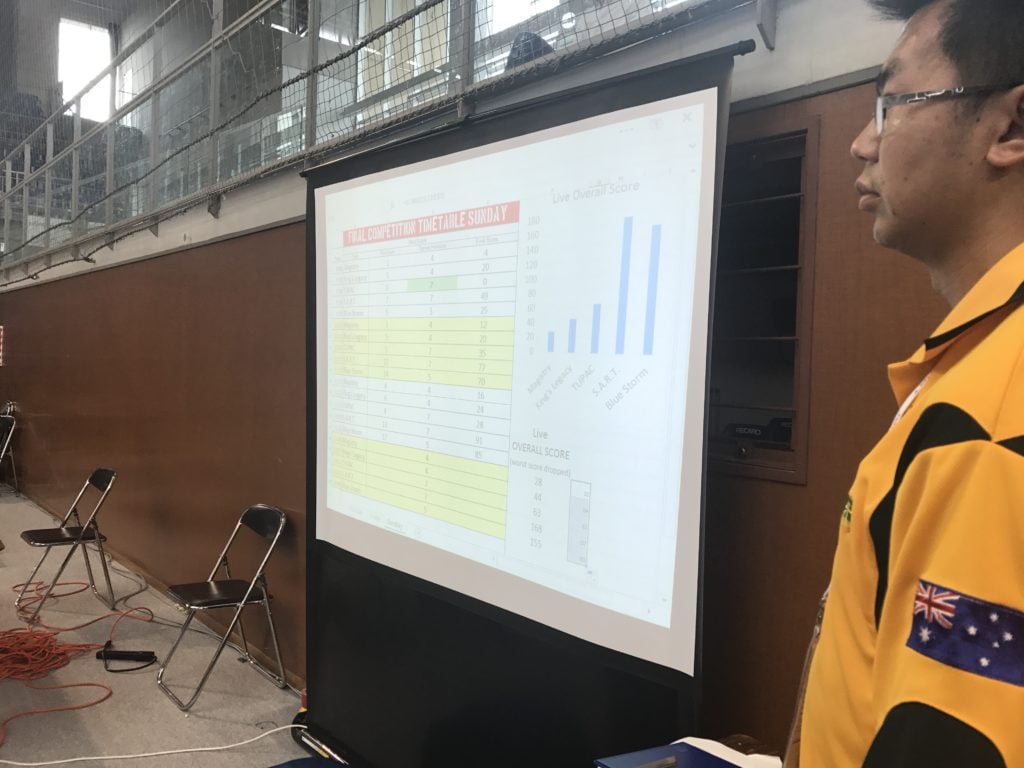 Above: Tired but elated, we celebrate by taking yet another team photo.

Now for the bit that everyone’s interested in. On the first day of competition, we made an agreement with the teachers – if we won, we would get a photo of them dabbing. To be honest, I don’t think they expected us to win – but they were true to their word. We walked from the rescue venue to the Nagoya International Exhibition Hall for the closing ceremony. The other Australian teams invited us to join them at “Buffet Paradise” for dinner. We got back to the hotel after 10:30 PM. If you thought it was over and that we would finally be able to get some sleep, think again. We had been invited to speak at the symposium, meaning we had to pull together some acceptable presentation before the next day. We worked on the presentation for around 45 minutes, however, in the end, we decided to complete it on Monday.