This was our first time printing with the new filament, so we wanted to run some tests to see just how much the belts could take.

NinjaFlex SemiFlex is a specially formulated thermoplastic polyurethane (TPU) material, which results in a “truly flexible” print with up to 600% elongation and allowing for repeated movement and impact without wear or cracking. The SemiFlex variant is a stronger version of NinjaFlex that sacrifices some flexibility for improved strength.

To measure the force on the belts when they fail, we used a force sensor from PASCO Scientific. The sensor is rated for up to 50N of force.

The sensor module was connected to a laptop running the SPARKvue software to record data via a PASCO AirLink.

The test bands are printed with sapphire blue NinjaFlex with a radius of 25mm, thickness of 1mm and height of 2mm. Above: The sensor setup used in all tests.

The first test was done to find the breaking point of the belts by repeatedly stretching the bands with 55N of force (the max for the sensor). To maintain consistency, a door was used to hold the band during the test. Above: Experimental setup used in Test One.

This test it was unsuccessful in the goal of breaking the band, showing that NinjaFlex can hold up to multiple stretches of over 55N. 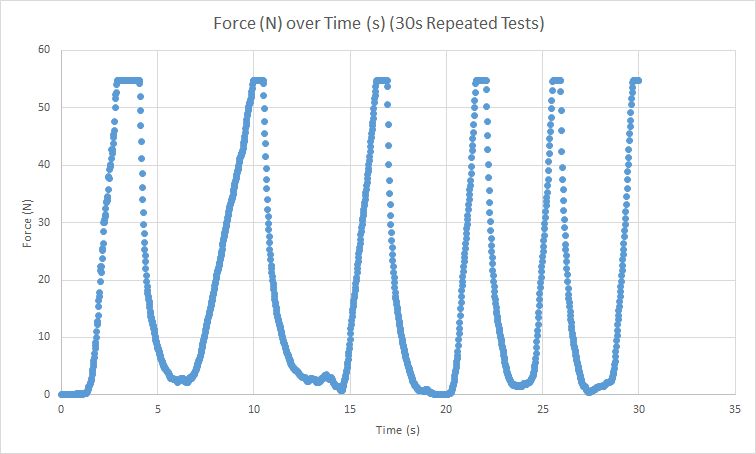 Above: 6 stretch tests over a period of 30 seconds (Test One)

For interest, the band was stretched to near breaking point and then put back on the force sensor to measure the force at the breaking point. The graph below shows the near instant recoil when the band snaps, demonstrating the strain it was taking. 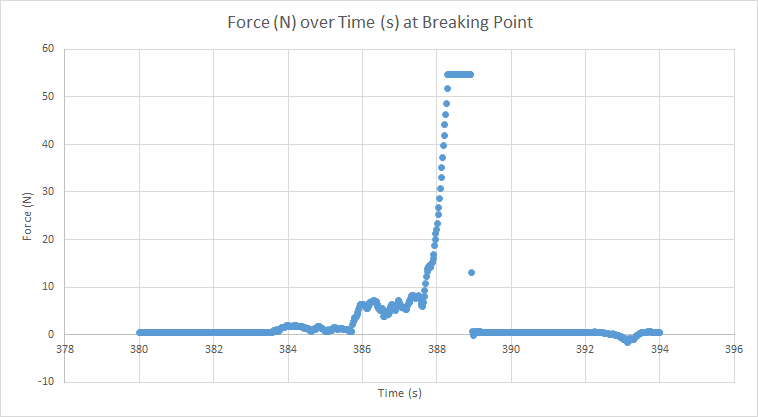 Above: Force over time at the band’s breaking point.

Test two was done to test how well the material retains its flexible properties after stretching.

In this test, a band was repeatedly stretched to 12.5cm. The force required to stretch the band to this point was recorded after every trial. Above: Experimental setup for Test 2. The force sensor was secured to the desk and the band was stretched to the tape mark every trial.

The results showed that the band required 55N (or greater) of force for the initial stretch, however that quickly dropped off and leveled around 35N.

This is important to note as we may have to print bands that are smaller than the wheels and then stretch them over the wheels to avoid slippage once the belts adjust. 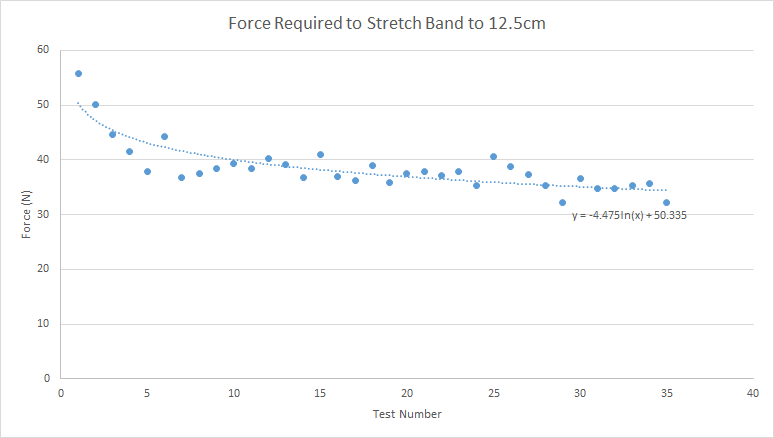 Above: Force required to stretch the band to 12.5cm (Test Two)

Such a thin band easily stretches and does not retain its original size at all. Above: A new band compared to a band that has been stretched to near breaking point.

A thicker band, like the ones we have designed for the robot, may reduce this problem.

Overall these tests have given us much to think about. We now know that NinjaFlex is extremely flexible and strong, with a thin band being able to hold under forces of over 55N. We also discovered that the filament doesn’t return to its original shape and size completely when stretched to near breaking point.

While our belts won’t have to endure this kind of treatment when on the robot, we have a couple of ideas. We have designed the belts to fit the wheels exactly, and hopefully the properties of a thicker design will be enough to prevent stretching.