Today, I uploaded all of the SARTs code to our GitHub repository which you can find here. 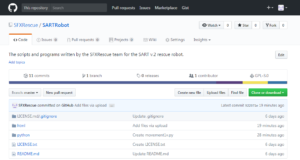 We have released our code under the GNU General Public License v3.0 so all of our code is ready and available to download, try out and improve! The “html” folder contains all the necessary web scripts and assets to create your own version of the SART control interface. The “python” folder contains many scripts. It is not tidy right now, but it contains three folders: ‘actual scripts’ which, you guessed it, contains the scripts used by the team, “tests” which contained many scripts used to test certain aspects of the ‘movement.py’ script such as websockets and serial communications, and lastly, “other scripts” which contain more testing scripts.

Next post by Ryan: Let’s break it down: movement.py